We’ve been wanting to go to Maggie Daley Park for a while now and finally found a few good days to go (actually we recently ended up going twice!). The first time we drove and the second we took many forms of transportation, which made it interesting.

Kidlist reader Eva tipped me off on a great parking deal and sent me the info, complete with a screen shot: 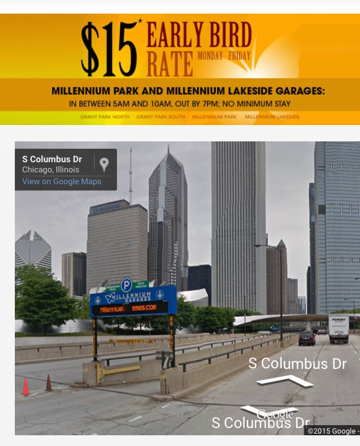 How awesome is that? Thank you so much Eva! You can check out this deal directly on the Millennium Garages website as well: $15 Early Bird Rate. (Editor note: the early bird rate is now $16 as of 2018. Visit site to confirm current pricing.) Have I mentioned how much I love getting ideas and emails from all of you?!

So if you want to drive, your best bet is to park in the Millennium Park garage and get there before 10am. If you are a mom rock star and want to stay all the way through dinner, then have an early one because to get the $15 deal you have to be out of the parking lot by 7pm.

Eva also had some comments and tips that I thought were very helpful:

The park is amazing and sectioned off into different areas and age groups. I suggest getting there early because it got crowded by lunch. Make your kids wear bright clothing because they are hard to spot sometimes when they climb into the towers. There is not much shade so bring sunscreen. They have 2 small splash pad areas to cool down. A lot of areas to picnic so definitely pack a lunch. No restaurants nearby unless want to walk to millenium park or michigan ave. Also didn’t see a bathroom but didn’t look around for one. They have a huge climbing wall area for an additional fee and a mini golf. Plenty to do for the day. We had a great time. Our 5 & 3 year old boys lasted about 3 hours before they got too tired. We would go back again!

Make it a Transportation Day

The second time we went, we drove to our train station, took the BNSF to Union Station, hopped on a water taxi to Michigan Avenue and then walked a few blocks to Millennium Park. On the way back we took a cab back to the train station. You can make it fun for the kids and call it a Transportation Day!

Train
Check out the train schedule on the Metra website: metrarail.com and take whichever train is most convenient for you. I had originally thought I had to plan which train to take based on the water taxi schedule, but it turns out that they run about ever 15 minutes. 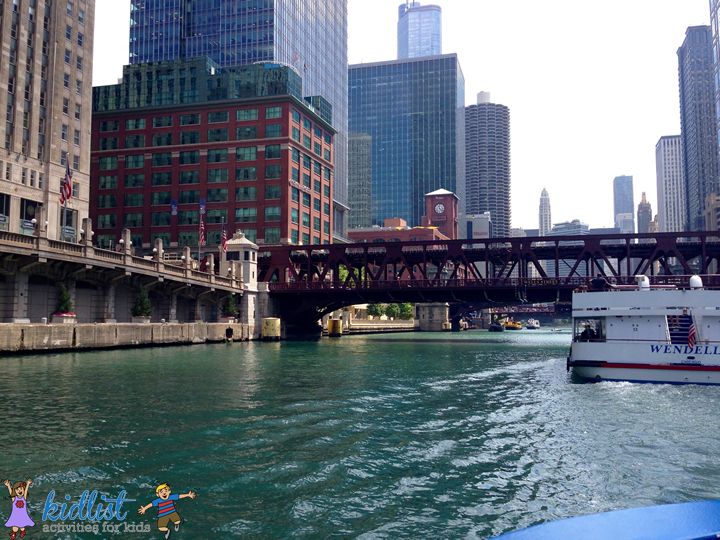 Water Taxi
There are two water taxi companies that travel between Union Station and Michigan Avenue. I’ll break them down for you here:

READ
A Mom's Review of Shalom Wildlife Zoo in Wisconsin 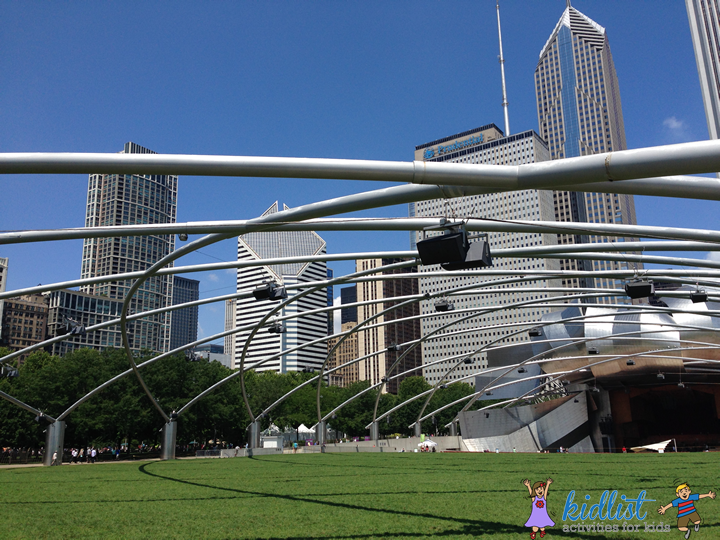 Millennium Park
You can stop to check out The Bean, have the kids run around in the The Crown Fountain (faces on the towers spitting water) or continue east around the lawn of the Jay Pritzker Pavilion to the BP Bridge, which goes directly to Maggie Daley Park. The Jay Pritzker Pavilion has multiple bathrooms, so it’s a great place to stop if someone has to go. There are bathrooms directly east and west of the lawn area. To the right (south) of the bridge there is a water fountain that we used to refill water bottles, that came in handy too. There’s a great map of Millennium Park so you can see what I’m talking about: Millennium Park Map 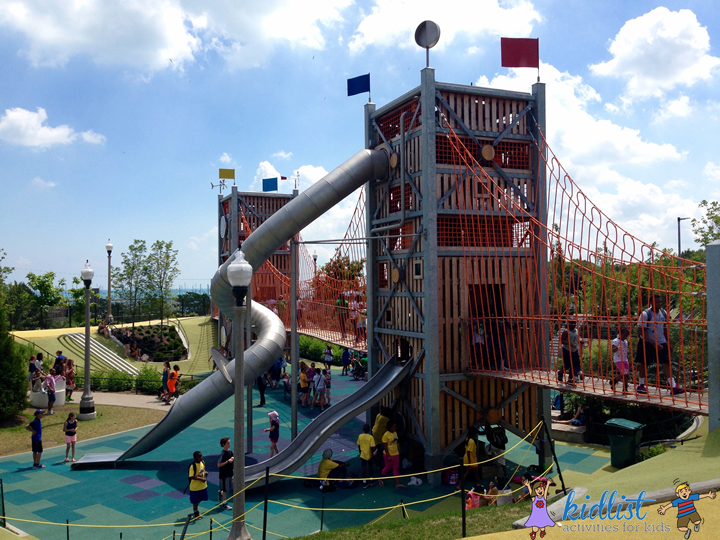 There are so many areas to explore and enjoy! When you first enter the park there are new rock climbing walls in the middle of the skating ribbon to the left that you can climb for a fee. There is also a mini golf course to the right that you can also play for a fee. The rest of the park is free. The play equipment is really fun, creative and well designed. The areas are marked with signs and suggested age ranges, which is great! The park is pretty big, so if you want to check it out ahead of time you can look here: Map of Maggie Daley Park 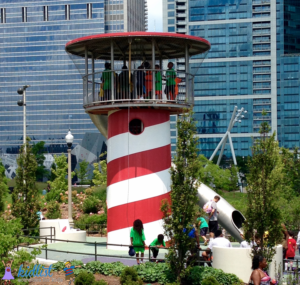 Regarding the play area I only have one word of caution… the slide coming down from the red and white striped lighthouse is really fast, especially when kids are wet. It starts out as a tub slide, then opens up to a flat, metal slide that seems harmless enough, but I watched numerous kids fly off past the end of the slide. My kids were not wet from the splash area at the time, decided to go down together holding each other and they still slid quite a bit further and faster than they anticipated.

It’s really sunny!
I would recommend having a picnic lunch in the shade at Millennium Park before heading over to Maggie Daley Park because there really isn’t much shade. There’s one small hut and a limited number of small trees for shade. I spent the majority of the time standing or sitting in the shade that the structures made, as did many of the other parents and caregivers.

Bathrooms
The first time we went to the park I asked one of the security guys where the bathroom was and he said, “In the Fieldhouse by Randolph and Columbus.” We were one the opposite end of the park at that time so I was surprised by his answer. I just looked at the map and there seems to be only one set of bathrooms on the north side of the park, north of the skating ribbon and rock climbing walls. So I would suggest stopping by the bathrooms by the Jay Pritzker Pavilion before walking over on the bridge (like I mentioned above). 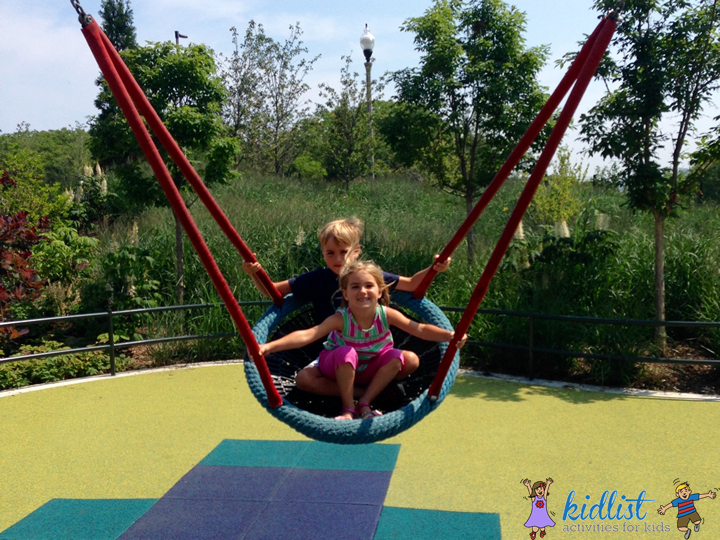