When I told my husband our one-year-old shouldn’t wear his winter coat in the car, he looked at me skeptically. “Won’t he be, uh, cold?” he asked. “Why can’t he wear a coat?” I wasn’t entirely sure. So I called Jill Braselton, the Lead Outreach Specialist at Northwestern Medicine Central DuPage Hospital, for a better explanation of winter car seat safety. 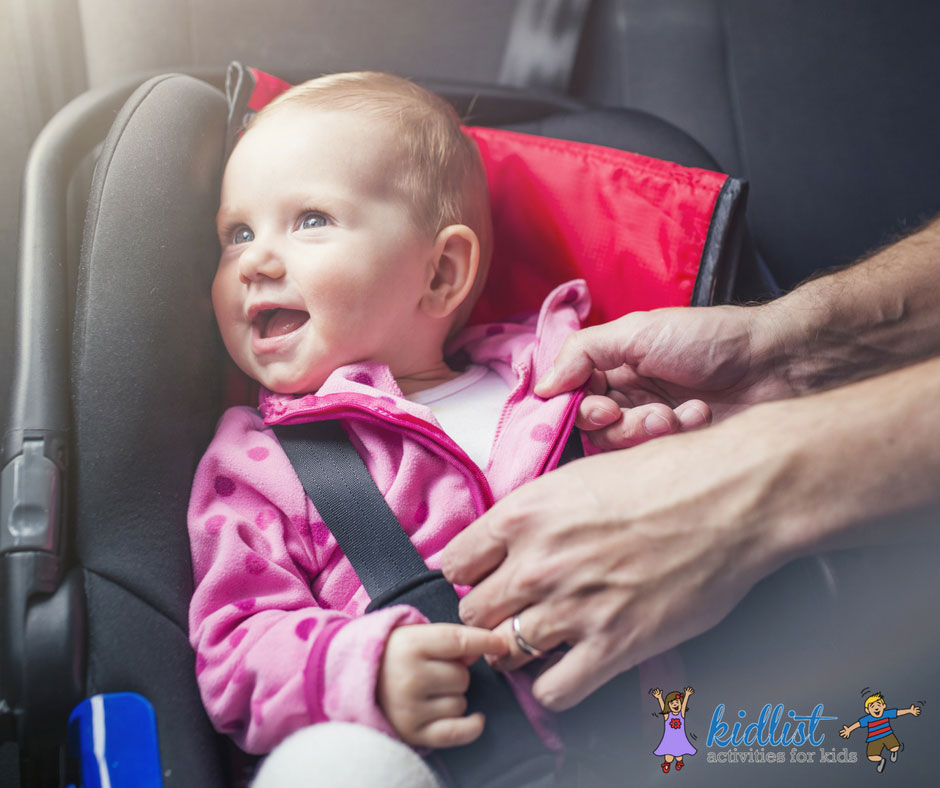 “In a car crash, whatever clothing you’re wearing is compressed to one layer of clothing,” Jill explained. The straps can look snug while a child is all bundled up, but in a crash, it would be as if they were only wearing a thin shirt.

But warmth is important, too; after all, “we live where it gets to be sub-zero,” as she says. If you’re able to warm up the car (never in the garage, of course), that’s great—but also not possible in many situations. So how do you keep kids safe and warm in the car?

“It’s just being mindful of the clothing you put your child in, so they’re not in extra-huge, puffy things,” Jill says. If you have a six-month-old wearing a fleece sleeper, for example, that’s great for the car. Just make sure the straps are snug.

Personally, I found a thin fleece jacket that’s very warm (especially with a couple thin layers beneath), but doesn’t create much bulk under the harness. It’s definitely warm enough for going in and out of parking lots on most days. I save my son’s big puffy coat for playing in the snow.

Get Creative with Coats (and Blankets)

Try buckling older kids in first, then putting their coats on backwards. For a smaller child, put a blanket (or a few!) over the top of the carseat. “Tuck them in a little cocoon,” Jill says.

Just make sure to keep babies’ faces “open and visible” so they can get fresh air in the car or the store. (It’s fine to throw a blanket over the top of the carrier while you walk through the parking lot.)

Get Your Straps Snug

This is the number one mistake Jill sees parents make—and not just in winter. “Most parents don’t have [straps] as snug as they should be,” she said. You shouldn’t be able to pinch any of the harness material between your fingers.

Chunky sweaters and puffy jackets get squished during a crash. “If you have to adjust the straps to accommodate the extra clothing, it could affect how the straps stay on their shoulders… If their straps are loose and the harness strips aren’t adjusted, the child could come out,” Jill says.

Also make sure that the harness clip is even with the child’s armpit. Shoulder straps should be:

Often, she says, children in rear-facing seats have the harness too high.

This is another tip that’s good year-round. “Oftentimes, parents turn their child forward-facing too soon,” Jill says. “The recommendation is two years or the weight limit of the restraint.” That means some kids can stay rear-facing until three or four years old, if that’s what it takes for them to hit the weight limit.

Parents may also think it’s strange to have an older child rear-facing; after all, the recommendation was different a few years back. But she says to remember that kids don’t know the difference. “As long as they’re rear-facing, they don’t know what it’s like to face the front.”

Find more resources on the Kidlist Resources for Families page!