We were invited to see Mary Poppins Returns this week and enjoyed the continuation of the story from the original movie in 1964. Emily Blunt did a fantastic job with the lead role and Lin-Manuel Miranda released his inner Hamilton during one of his solos, as my son exclaimed when we walked out of the movie. We weren’t sure what age group the intended audience was because there is seriously everything in this movie… animated appearances reminiscent of Bedknobs and Broomsticks (remember that movie?!), tons of imagination, big musical numbers, heartfelt moments as the family mourns the loss of their mother, a wacky cousin played by Meryl Street, and surprise appearances by original favorites. There were also great lessons in the songs, like how important it is to change your point of view with certain circumstances and not to judge a book by it’s cover.

The costumes in the animated world of the china bowl were impressive and looked like they were made from stiff hand-painted fabrics.

Emily Blunt is Mary Poppins, Lin-Manuel Miranda is Jack, Pixie Davies is Annabel, Nathanael Saleh is John and Joel Dawson is Georgie in Disney’s MARY POPPINS RETURNS, a sequel to the 1964 MARY POPPINS, which takes audiences on an entirely new adventure with the practically perfect nanny and the Banks family.

This scene with the dancing and singing leeries (lamplighters) was one of our favorites. 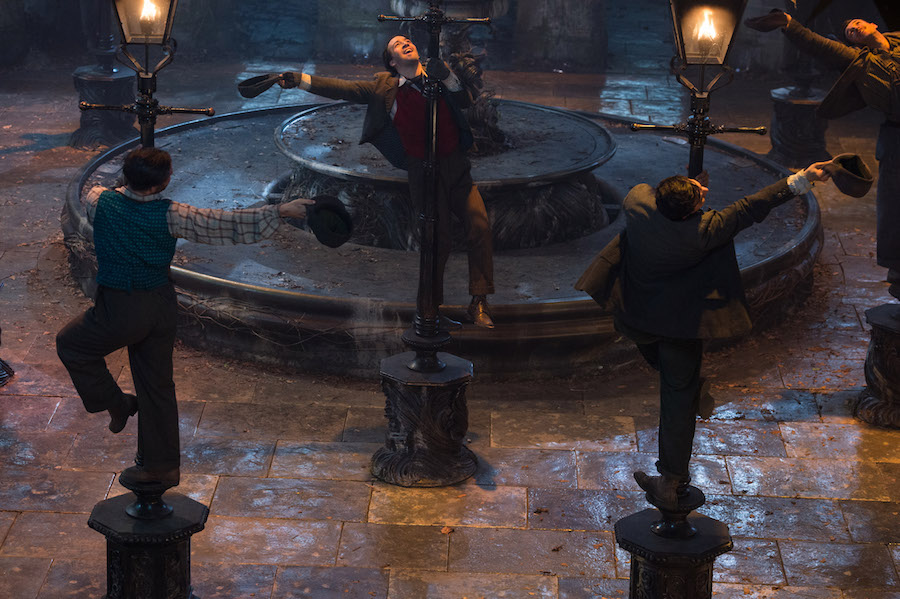 Lin-Manuel Miranda is Jack in Disney’s MARY POPPINS RETURNS, a sequel to the 1964 MARY POPPINS, which takes audiences on an entirely new adventure with the practically perfect nanny and the Banks family.

Despite the struggles of the family, they were always having fun!

Hi! It’s Annie’s eight year old daughter back again and this time I am talking about Mary Poppins Returns (click here for my last review). The movie was awesome! I wish there was another Mary Poppins, it was so good! I really liked all the characters, but if I had to choose my favorite it would probably be Annabelle Banks, the little girl. My favorite part is when all the leeries were dancing around the lampposts. My opinion is ages five and up will really enjoy the movie. I don’t think you have to watch Mary Poppins to watch Mary Poppins Returns. The movie is mostly about imagination. I would go and see the movie again if I had a choice!

In Disney’s “Mary Poppins Returns,” an all new original musical, Mary Poppins is back to help the next generation􏰀 of the Banks family find the joy and wonder missing in their lives following a personal loss.

Michael Banks was just a child when the practically-perfect nanny Mary Poppins first visited the Banks home, but he is now a grown man with children of his own. A struggling artist temporarily employed by Fidelity Fiduciary Bank, the same financial institution where his father and grandfather worked before him, Michael lives at 17 Cherry Tree Lane with his children Annabel, John and Georgie. Times are tough in Depression-era London. It’s the 1930s, and the city is in the midst of the “Great Slump,” so money is 􏰀tight, people are anxious and the future is uncertain.

The family is struggling to cope with the recent death of Michael’s wife, and the house is rundown and in a constant state of chaos, despite the best efforts of their inefficient yet well-meaning and warmhearted housekeeper, Ellen. With the harsh reality of the 􏰀times and the burden of their loss weighing heavily on the family, the children find themselves taking on additi􏰀onal responsibili􏰀es around the house…and growing up much too fast in the process.

His sister Jane has inherited her mother’s enthusiasm for good causes, and, while busy herself promo􏰀ng workers’ rights, finds 􏰀me to help Michael and his family every chance she gets. As it becomes more and more difficult for Michael to connect with his children while processing his own sorrow, the chairman of the bank, Mr. Wilkins—who appears to be a congenial and altruis􏰀c mentor to Michael but is actually duplicitous and shrewd—is in the process of foreclosing on the Banks home, sending the already frazzled Michael into a further tailspin.

Fortunately, the winds begin to change, and the enigma􏰀c governess whose unique magical skills can turn any ordinary task into a fantas􏰀c adventure, enters the lives of the Banks family once again, having not aged a single day. Teaming up with an old friend, Jack, a charming and eternally op􏰀mis􏰀c street lamplighter, they take the Banks children on a series of whimsical adventures and introduce them to colorful characters like Mary’s eccentric Cousin Topsy and Jack’s lovable band of leeries, bringing life, love and laughter back into the home.

Mary Poppins Returns is rated PG and the run length is 130 minutes.

The spirit of “Go Fly a Kite” definitely continues to run through this movie and Disney created an activity sheet with directions to make your own kite. You can click on the image below and print at home.

READ
Review: The Princess and the Pea at the Marriott Theatre in Lincolnshire 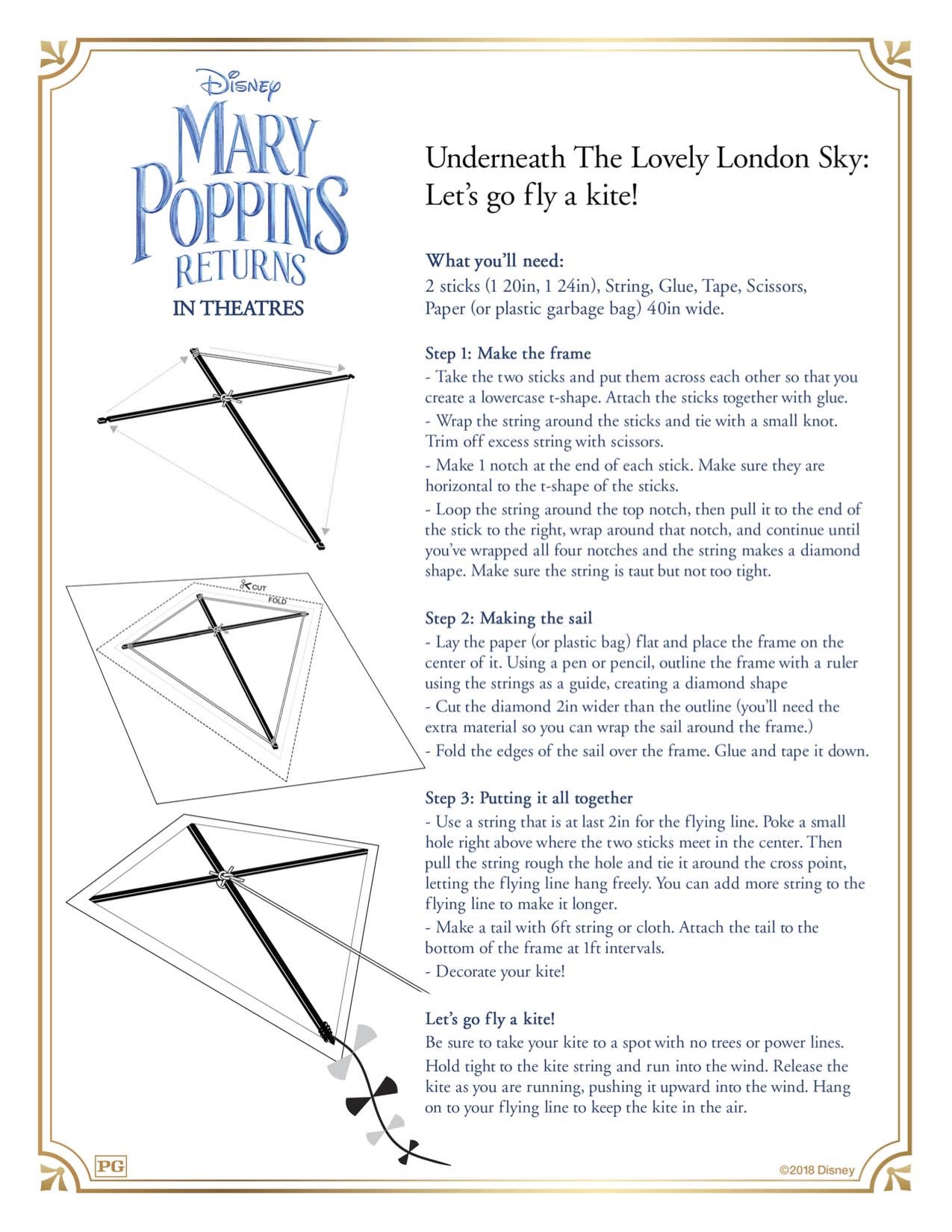 Be the first to comment on "Movie Review: Mary Poppins Returns"