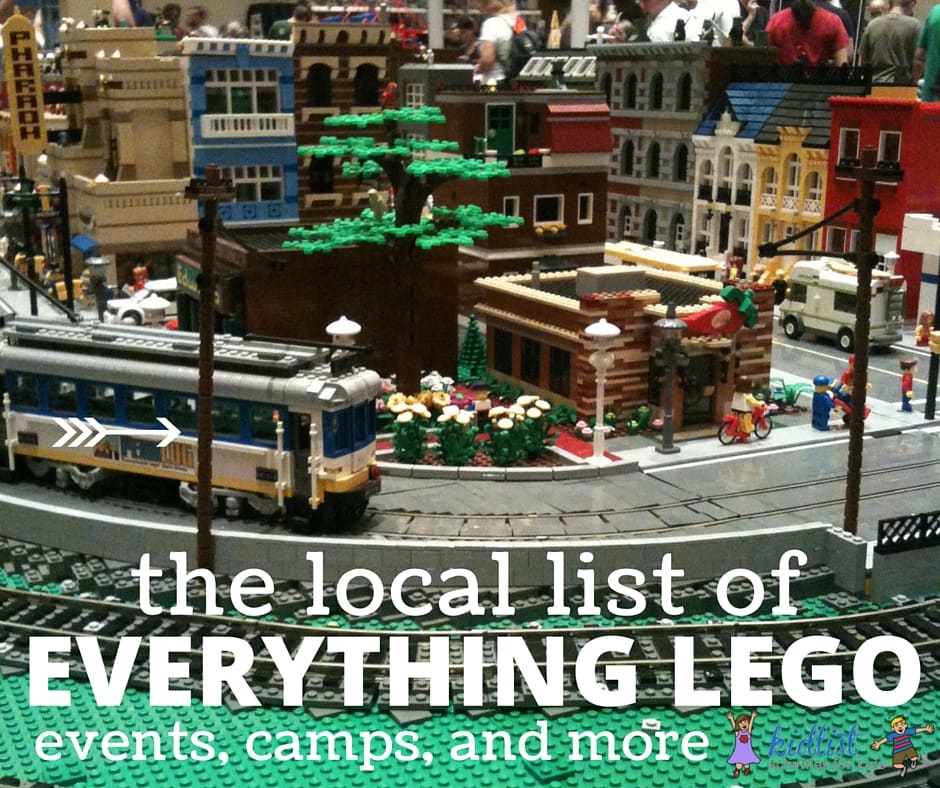 LEGO bricks have been a very favorite toy for my kids since they were old enough to begin playing with Duplo sets. My older boys have grown beyond these to LEGO bricks and I am utterly amazed at what they can create in one afternoon. LEGO is such a great activity for so many reasons, teaching lifelong skills such as reading and following directions, sequential order, patience and organization just to name a few. LEGO bricks are fun for all ages; here is a list of local events to help celebrate the LEGO fan in all of us!

LEGO Americana Roadshow
From June 18 – July 4 at Northbrook Court (Northbrook, IL) there will be a travelling display of large scale LEGO models replicating some of our nation’s most well known landmarks. Come see life-size models built entirely out of LEGO bricks all over the mall.

Brick World
This two day event is being held on June 18 & 19 at the Renaissance Hotel and Convention in Schaumburg. See 100,000 square feet of spectacular creations all built from LEGO bricks by enthusiasts from around the world. Enjoy interactive displays and purchase LEGO sets and accessories from many vendors. This is a ticketed event and more information can be found here.

Brick by Brick at the Museum of Science and Industry
Brick by Brick features more than a dozen giant constructions including a 60-foot Golden Gate Bridge, the International Space Station and Roman Colosseum. The exhibit runs through February 2017. It requires an additional, timed-entry ticket ($9 for adults and $7 for kids ages 3-11), included in Explorer ticket packages. Click here to read Annie’s in depth review and recommendation here. Museum of Science and Industry will host a Summer Brick Party on Saturday, July 16. Click here for the details.

LEGO at the Library

LEGO Build-Off Competition at Lisle Library
Use your imagination to build a Lego creation and compete with other builders to win this year’s LEGO Build-Off. Trophies will be awarded to categories such as largest, coolest, and even weirdest creation, for ages 5-14. Use your personal LEGO collection and submit a photograph to the library by May 31, 2016.

Family Lego Night at Clarendon Hills Library
Calling all LEGO fans…let’s see what you can create with our LEGO bricks! On May 26, visit the Clarendon Hills Library and make a LEGO creation based on a theme. All creations will be put on display in the Library. Geared for families with children 3 years old and up and no registration is required.

LEGO Club at Thomas Ford Library
The building club will meet on June 22 from 10-11 am.

Movies in the Park at the Elmhurst Park District
On July 15, grab a blanket and popcorn and attend an outdoor viewing of “The LEGO Movie” at Wilder Park.  Movies begin at dusk, approximately 8:30 p.m. Stop by early for a children’s craft project at 7:30 p.m.

LEGO Club
The LEGO stores in Orland Park, Chicago and Schaumburg have LEGO club where your kids ages 6-12 can build mini models with other LEGO fans. The club usually meets monthly and the next build is either May 21 or 28 depending on the store.

All dates and times are subject to change.

Meghan and her husband live in Downers Grove with their two sons ages six and seven and their four year old daughter. She is a transplant to the Chicago area and absolutely loves all that the western suburbs have to offer for her young family. One of their favorite places to visit year round is the Morton Arboretum. During the summer months, they love to garden, bike, swim, and play golf together. In the winter, Meghan and her children are happy to be home trying out new kid friendly recipes and being creative. As a former teacher, Meghan believes in a healthy balance of unstructured play and scheduled activities. She is excited to be part of the Kidlist team and wants to help families add fun and laughter to their days!

Ninja Warrior Course and More at Meineke Park in Schaumburg

Where to See Waterfalls Near Chicago

Be the first to comment on "LEGO Events Summer 2016"