Stage 773 on Belmont in Chicago is offering fun entertainment for all ages on Saturday and Sunday afternoons. A comedy show in the city that my kids can enjoy too? Brilliant. There are four shows available: an award-winning comedy with no words Bri-Ko, a funny, yet wholesome take on the stereotypical fairytale full of crazy characters Mass St.: Kids!, a tap dancing superhero taking on his nemesis, The MADD Tapper, in The Adventures of Tapman, and a laser light show combining improve and live illustrations The Laser Comedy Show. 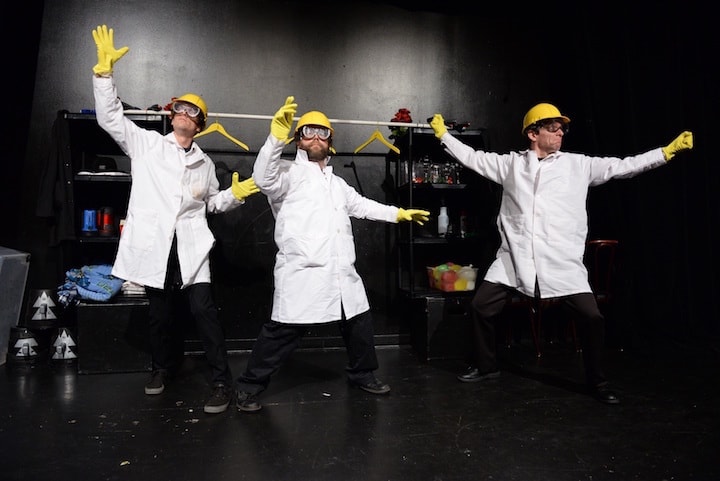 We had the pleasure of seeing Bri-Ko this past weekend and were definitely all laughing out loud. The theater is on the small side, so there aren’t any bad seats. This non-verbal comedy has dramatic music to compliment the funny situations that these three guys find themselves in. The performance became more and more entertaining as the show went on.

However, there was one scene that I was not too happy about. The comedians wheeled out a huge beanie boo (my daughter of course immediately said “awww”) and they preceded to make it pass out with pretend chloroform and jab it with an x-acto knife. After opening up its stomach, they used tongs to extract three hats that they then put on to go to bed. I didn’t understand the relevance of this scene and wasn’t pleased to have my kids watch it. I told my cousin, who has a seven year old daughter, about how I felt and she said it sounded funny. Maybe it’s a matter of opinion, but I wanted to give you a heads up in case you wouldn’t be okay with it. So I would recommend the show with that one reservation.

All in all I thought it was great to be able to enjoy an afternoon with my kids in the city and share some laughs together! There were many funny skits that we still talk about and laugh. 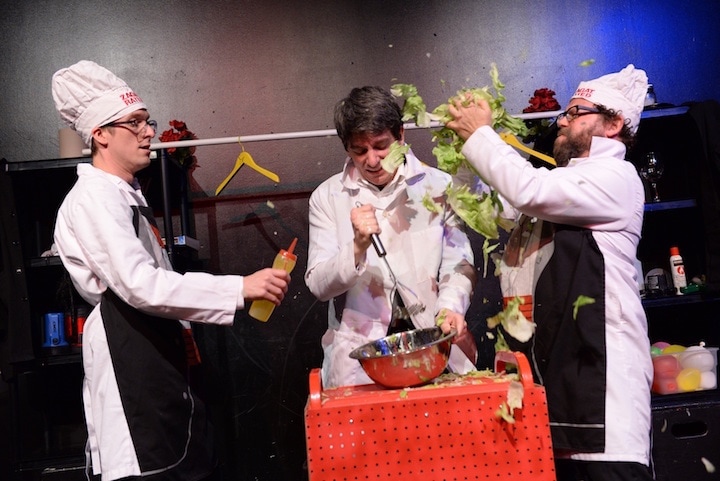 Summaries of the four shows in The Inoffensive Theatre Series

BRI-KO
Simple tasks become riotously complicated in BRI-KO. In this non-verbal comedy experience presented by Stage 773, clowning-meets-sketch as audiences lose themselves in the performers’ joyous, upbeat world. Filled with audience participation, incredible costumes, and mind-blowing props and visuals, BRI-KO is universally appealing and fun for the whole family. The performers’ all-silent, all-hilarious show won the 2014 Second City Best of the Fest Award at the Toronto Sketch Comedy Festival.

Mass St.: Kids!
Mass Street is a fun place full of characters: a forgetful Queen, a stubborn King, and even a silly man with a great, big beard and a guitar. In Mass St.: Kids!, disaster strikes (which usually happens in fairytales), the people of Mass Street must work together to save the town, and the characters probably learn a lesson (which also usually happens in fairytales). This Mass St. Productions family-friendly show is pure, honest hilarity at its finest.

The Laser Comedy Show
In Laser Light Comedy’s The Laser Comedy Show, performing artist Chris Fair uses Laser Reactive Technology to draw characters and scenery on a glow in the dark screen where the lines fade in moments like a high tech etch-a-sketch. Chris brings the characters to life by voicing them over, creating sound effects, music and continually drawing action to open up a 2-D screen into a 3-D world that takes audiences on a laser journey they won’t ever forget.

The Inoffensive Theatre Series’ shows run between 50 and 75 minutes in the Box Theater on select Saturdays and Sundays at 2 p.m. Patrons have the option to purchase a $75 flex pass, which is valid for 10 tickets to use however they please (all at once, two at a time, etc.) Regular tickets are $12 for adults and $6 for children 12 and under, and can be purchased at www.Stage773.com or by calling (773) 327-5252.