The continuation of Jess’s homemade crafts and treats…

This takes commitment!  Here is a link to a great article on how to make an authentic from scratch Gingerbread House, which I did for the first time this year. 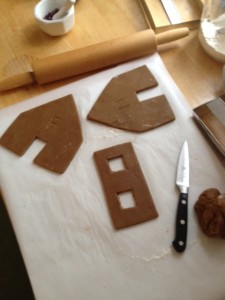 They are not joking when they say you need to enjoy the process.  It really was one day for making the dough, one day for baking, and one day for decorating – perhaps if you have older kids you could cram it into a day but its a lot of work.

Some notes about the recipe from this article.  My dough turned out a little dry (now it could be that my 19th month old distracted me and I added an extra cup of flour, or that I doubled the recipe which ended up being a whole bag of flour)  I would add less than what it said knowing you could always add more in.  I simply added water to my dough to get it to hold shape better and not be so crumbly.  My dough worked much better at room temperature, rather than being chilled, but that could be due to the lack of moisture that was in my dough. 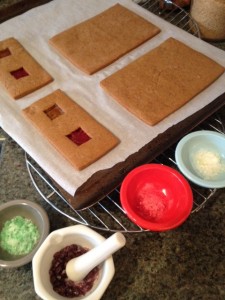 Also I purchased a $7 Wilton cookie cutter kit from Michael’s, so I didn’t have to do any design work which I was very thankful for this year – maybe in future years we’ll have design competitions and get out cardboard and our protractors to make templates, but if this is your first go simple.  Use the template they provide or find a cutter kit. 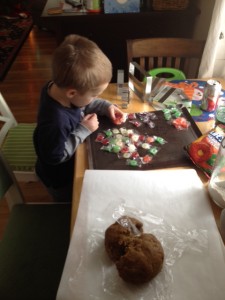 Stained glass windows – were super fun and extra special.  Fred loved sorting the Life Savers by color and who doesn’t love crushing stuff in a mortar and pestal?  I think the key is to really crush the candy fine, you get a more evenly spread, smooth, translucent window.  I’m so excited to put a battery tea light inside it and see it glow.  Our ratio of 3 Life Savers for two windows produced more than an adequate amount of “glass”.

I did in fact make Royal icing with egg whites (I had another recipe that just wanted yolks so it worked out for me).  I would not allow children to eat this, plus I don’t think its what they expect icing to taste like.  It was a simple process to make.  To store until ready to use or in-between assembly and decorating I put my piping bag into a gallon size ziplock bag with a wet paper towel and it stayed really nice. 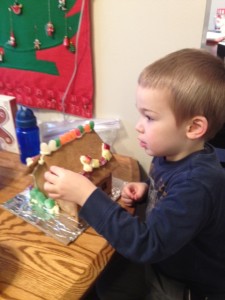 I found some heavy duty cardboard boxes and cut pieces to size and covered in aluminum foil as a setting for our gingerbread house.  I do have a nice piping bag but did not have it with me to put the house together so I used the ziplock make your own piping bag, it worked fine. It’s not good for very detailed things but good for the preschool crowd!  My assistant held the pieces as steady as he could as I applied the mortar.  After having it assembled we did some landscaping decorating as the structure needed to firm up.  About an hour and half later we did the final decorating.  I applied the frosting glue and he applied the candy which he and his buddy had a blast doing.  It was a great project and will make a very sweet center piece for our holiday table.  A lengthy but fun and memory making project that may in fact become an annual tradition. 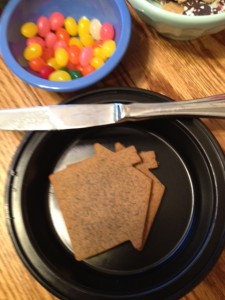 I also used a cookie cutter shape liked a house for the boys to use buttercream frosting and decorate to have a special snack!

Be the first to comment on "Homemade Gingerbread House"