What do you think Courage means?

This poignant question led my nine-year old son and I into a riveting play that addresses “issues of social inequality and familial, generational and environmental responsibility”. Characters Zeph and Kegan are brothers that are struggling to keep their family together in an area known as Shambles while their father, Mel, works in a mine while battling a blinding disease known as Blight. Their journey follows Zeph as he navigates the path for his future while helping his younger brother, Kegan to realize his capacity to be courageous. This engaging story was “inspired by Greek mythology and personal stories from young people gathered from Chicago classrooms, ‘Sight Unseen’ explores themes of power, allegiance and our responsibility to past and future generations”. Geared to capture and speak to middle- school children, this play entranced my son and me, and led to some very interesting and meaningful conversation after the play had ended.

The theatre’s inclusive and welcoming atmosphere was led by pre- and post-production discussion and inspired the audience and actors to be open up insightful dialogue about what weakness, courage and destiny can mean. I felt that the discussion really helped the meaning of the play become more transparent and go beyond the basis of the story. I would highly recommend this play for grades 4- 8.

More about the theatre: “Adventure Stage Chicago (ASC) creates and tells heroic stories about young people. Uniquely involving our West Town neighbors into the creation process, ASC’s original productions contain themes and ideas that are developed with input from community members. One of the only theaters in Chicago that develops and presents works specifically for the middle school–age audience, we believe good stories encourage everyone to think critically about the community we inhabit and challenge all of us to act heroically in order to be the change we want to see in the world. ASC programming includes mainstage performances, touring, literacy residencies, teen mentorship, and community engagement.” 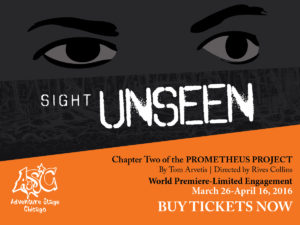 There are three performances left:

This post brought to you by Adventure Stage Chicago.

Liz is a mom of three equally active and adorable sons, aged six, eight and twelve. As a child, her family moved to Western Springs from Central Illinois, and she and her husband are thrilled to raise their own family here. She works two days a week as a medical assistant, so she tries to fill her time with the boys outside of school with activities that they can all enjoy. This winter, they’ve enjoyed swimming at a few indoor pools, and the boys love going to zoos and children’s museums. In the summer they love to do anything outdoors; they try to hit a different park every week! Their go-to for indoor days are open play spaces that have a range of activities to accommodate her children’s age differences. Outside of being a mom and working, Liz’s passions are photography, reading, and, as an extrovert, she loves meeting new people and connecting over mutual interests.

Be the first to comment on "Adventure Stage Presents SIGHT UNSEEN"